The day the railway opened, 15th July 1840, had been accompanied by considerable celebration not only by the dignitaries but by ordinary folk as well. This is the account of the fatal outcome of a gentleman from Preston who had celebrated just a little too much...

Fatal Accident on the Line

Robert Hornby Porter of Poulton. A schoolmaster, stated:- A little after seven o’clock last night, I was returning with the train from Fleetwood. I was sitting on a first-class carriage, the second in the train. The deceased was sitting on the same carriage, on the same seat as myself: he appeared to me to be very intoxicated. When the train had got past the piles (on which the train crosses the Wyre water), which might be a mile and a quarter, the deceased, as I thought, was attempting to get to the other carriage, which was  the first: and in that attempt, he fell down and disappeared in a moment. I called out as hard, as hard as I could shout to the engineer that a man had fallen down. The engineer as soon as I believe he heard me, stopped the engine as soon as he could: and at some distance, I saw a body lying. The engineer and the guard were both attending properly to their duties. No blame can be imputed to any of the servants of the railway company. The accident was entirely occasioned by the improper conduct of the deceased, in endeavouring to get to the first class carriage whilst the train was in motion. William McKay, No 236 of the county constabulary stated:- I was on duty yesterday at Fleetwood; and, about seven o’clock in the evening, I saw the deceased who was in a state of intoxication. He was then in a second-class carriage; and I was authorised by a gentleman to take him out of the carriage, which I did; and in a few minutes afterward, I took him out a second time.  I did not consider him in a fit state to go as a passenger with the train. The deceased then went into the rear of the carriages, and I saw no more of him. The deceased id the same person I took out of the carriage.

Some other witnesses were examined, whose evidence was for the most part only corroborative of the above statements. The jury immediately returned a verdict of “Accidental death.” We learned that Sir Peter Hesketh Fleetwood, on hearing of the melancholic event which thus marred the otherwise uninterrupted harmony of the day’s proceedings, immediately deputed some gentlemen to enquire into the circumstances of the family of the deceased, and to provide for them in such a manner as the circumstances of the case required; and we have much pleasure in being able to state, that by the human attention of the worthy baronet and of other persons, the  disconsolate widow and family of the deceased will in their bereavement receive timely relief. It is some consolation to observe, that no blame or carelessness can be imputed to any person connected to the management of the train.

Related to Residency with Wyre BC People, Place & Conversation

Pass a building site at the bottom of the aptly named Station Road in Poulton and the sharp eyed may notice amongst the piles of earth and concrete a patch of ancient cobbles, some railway sleepers and a couple of lengths rusty railway track.

These remnants of the Industrial Revolution are a clue to the existence of one of Wyre’s most “Unlikely Places” the remains of one of the first railways to be built in Britain, the railway that connected the new town of Fleetwood to Preston and the rapidly expanding railway network that was linking the factories and ports of Lancashire with London. It is also the site of Poulton’s first railway Station.

Preston & Wyre Railway was conceived in 1835 by local landowner and politician Peter Hesketh Fleetwood, and opened in 1840. It carried passengers and freight until 1970 when the passenger service ended, freight services continuing until 1999.

The railway was once part of the West Coast mainline linking Scotland to London. On one occasion paying host to Queen Victoria on a return trip from Scotland. The railway was a great success, in its first month the service carried over 20,000 passengers.

Peer over the bridge at Poulton Station and a section of rusting rail track mysteriously vanishes into a thicket of bushes and brambles, this is another part of the railway to Fleetwood, a part that is still almost intact all the way to Fleetwood.

The railway is currently being refurbished by Poulton & Wyre Railway Society with the long term objective of re-establishing a working railway.

Related to Residency with Wyre BC - People, Place & Conversation
Posted by AJPEE at 2:40 PM 0 comments

A selection of images taken with the permission of the Poulton & Wyre Railway Society, of a section of the former Fleetwood to Poulton railway track, from the Fleetwood boundary of the former ICI site to the recently refurbished Burn Naze station.
Posted by AJPEE at 12:08 PM 0 comments 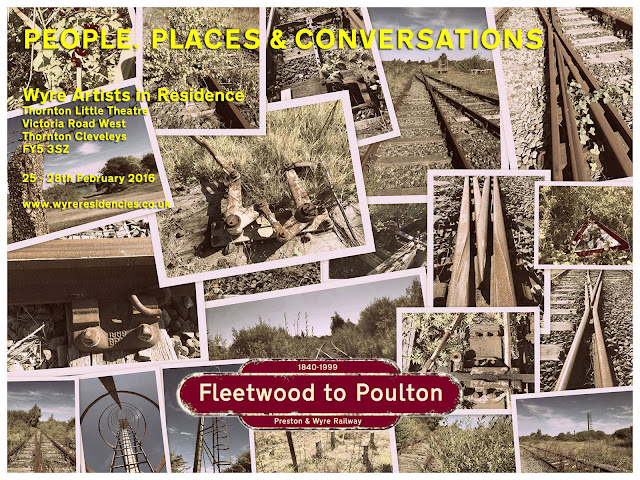 In August 2015 retired scientist and local artist Alistair Parker was awarded a commission as Artist in Residence by Wyre BC in partnership with LeftCoast, as part of the “Creative People in Places” initiative on the project, “People Places & Conversation”, part of a collective of six artists.

For his residency he chose to engage with the former historic Preston and Wyre Railway, a wonder of the Industrial Revolution and Victorian innovation. The railway was the vision of Sir Peter Hesketh-Fleetwood and opened in 1840; just five years after the opening of the first passenger railway between Liverpool and Manchester and only five years after work was started on the project. The railway has a fascinating history and was instrumental in the establishment of the port of Fleetwood, as the first town to owe its very existence to the building of a railway and the first seaside town on the Fylde coast. The railway was a great success it was planned to carry 15,000 passengers in its first year, the railway carried 20,000 passengers in the first month.

Unless you are tall enough to see over the parapet of the Breck Road bridge at Poulton Station you probably would not realise that as the railway track emerges from the station heading for Blackpool there is a branch off to the right just before the signal box, the rusting rails disappear into an overgrown tangle of brambles, bushes and rapidly growing trees, this is the disused railway line to Fleetwood, realigned here in 1896. Just four hundred yards further down Breck Road at the junction with Station Road another mysterious piece of railway history has recently been excavated, the remains of the original 1840 railway line to Fleetwood together with the foundations of the original Poulton Station. The Poulton to Fleetwood line closed to passenger traffic in 1970 and finally to freight traffic in 1999. The track rapidly became overgrown and virtually invisible, amazingly the track is still in place as far as the bridge at Jameson Road, a hidden reminder of a speculative adventure.

Plans to reopen the line began in 2006 when Poulton and Wyre Railway Society was formed with the objective of reopening the Poulton to Fleetwood railway line. To date they have refurbished Thornton Cleveleys Station and are currently engaged in the renovation of Burn Naze Station. The Society has cleared significant sections of the track and has a number of railway related items they are in the process of refurbishing, including a diesel shunter. Funds are currently being raised for the purchase and refurbishment of a Diesel Multiple Unit, similar to the last rolling stock that formerly ran on the line. A report commissioned by Wyre BC in 2009 estimated that a full refurbishment of the line would cost in the region of £40m, the option of a Heritage railway run by the Poulton & Wyre Railway Trust would cost £5.5m.

The artists’ task was to find a way of bringing the existence of the railway, its history and future to the attention of a wider audience. With the cooperation of PWRS a limited section of the track was explored together with the history of the railway and the plans for the future. Alistair also conducted a more detailed exploration of the history of the railway through local archives, the Internet and the resources of the British Newspaper Archive. The local libraries proved particularly helpful with this research.

Part of the brief was to engage with the local community. Alistair commission a local artist David McGuire to give his interpretation of the Preston and Wyre Railway. A retired aerospace design engineer, David had been a prolific illustrator and cartoonist in his earlier years but a career and family had cut short his artistic aspirations. It was my intention to offer David a challenge and encourage him to rediscover his artistic talents, I think the results will confirm that he has. Conversations have been had with local residents and people with an interest in the railway and its history. It is planned to engage with local schools in the coming months to complete the project.

Following early retirement as a business man and a career as a Laboratory Scientist, Alistair became a practicing artist, in addition to having a busy commercial art practice, he is engaged in contemporary art research through post-graduate Masters and Doctorate degrees at Lancaster University.